What are the best countries to be a farmer?

Farming is the basis of the economy of any country, without which it will fall and may face a serious financial failure.  Therefore, countries with most agricultural land and highly cultivated soils have a fairly strong economy and receive significant export profits.  Agriculture is mostly confused with the simple cultivation of crops; rather, it is a broad term that includes not only the cultivation of plants but also the cultivation of animals such as cattle and fish.

In addition to manufacturing, there are countries that focus on other areas to profit from the agricultural industry, and some countries go beyond domestic markets to explore more exports and provide an international consumer base.  All this has become possible thanks to a new technique of supply dynamics.

How important really is farming

There are many ways to estimate agricultural production, including net tonnage and the volume of goods produced in dollars.  It is important to look at both, as it is often the case that goods that are crucial for food supply in less developed countries do not turn out to be high-dollar crops.

Although agriculture is no longer a major employer in North America or Europe, and food security is not a top priority for most citizens, it is still a globally important sector.  As investors saw a few years ago, bad weather and low stocks quickly led to rising prices for many food items and led to unrest and political unrest in many countries.  On the positive side, it is the main source of export earnings for countries across the spectrum of development.

RECOMMENDED: How I Take Care of My Farm |You Too Can!

What are the best countries to be a farmer?

India is one of the fastest growing economies in the world and the seventh largest country on land.  The agricultural sector accounts for about 18% of GDP.  More than 58% of rural households are heavily dependent on agriculture.  Spices and condiments are mainly produced in India, followed by fruits, rice and wheat.  There are several segments in the economy, such as food grains, dairy products, meat, frozen foods, and so on.

Although agriculture is a small part of the country’s economy, it has maintained production at higher levels and adds 2% of its share to the country’s total GDP.  Germany is best known for producing grain and potatoes, which are not only used in different parts of the country, but also exported to many parts of the world.  This gives Germany and its agricultural sector an important status in the world.

The Netherlands, also known to many of us as the Netherlands, is the third largest agricultural country in the world, not because of the area they occupy, but because of the few acres used for cultivation and the tons of harvest it produces each year.  The country is blessed with both perennial and biennial crop production.  The farms are used using the latest research and mechanical equipment by experienced farmers.  Almost 27% of the total amount is now allocated for seasonal and permanent cultivation of crops.  There are also natural meadows, which account for 54% of the total land.

France has for many years been considered the agricultural center of Europe.  Thus, it is a major player in the economy of the whole region.  It is a leading agricultural country not only in Europe but also in the world.  It has about 730,000 farms, occupying a large area of ​​land and attracting 7% of the labor force in various sectors of agriculture, forestry and fisheries.  The agricultural revolution took place in the country after 2001, when many qualified experts began to pour into the industry and improve product quality.

Indonesia is the largest island and the most populous country in the world.  14 of the total GDP of the economy contributes to agriculture.  Commercial products such as palm oil, coffee, cocoa, rubber, rice, soybeans, corn, cassava, legumes, fruits and vegetables are the main centers of the agricultural sector.  Indonesia has the world’s largest per capita rice production.

Brazil is the fifth largest country in the world; half of its land is covered by forests.  The main base of the country is agriculture.  Southern Brazil is very fertile and properly irrigated for agriculture.  It is the largest exporter of sugar cane, coffee, soybeans, corn, vegetables, frozen chicken, beef and ethanol (plant-based), making it a basket in the world.

Liberia is one of the countries whose economies have jumped as a result of their investments in the agricultural sector.  About 80% of West African GDP is largely contributed by Liberia, making it the highest in the world.  68% of Liberia’s employment comes from agriculture.  Despite the years of civil war, which had devastating consequences, Liberia was able to find the most favorable region for agriculture (tree growing), and widely developed it.  As a result, rubber and oil palm are the main sources of their cereals.  More than 35,000 and 42,000 tons are produced and exported annually, respectively.

Somalia is the second most dependent country.  This contributed to about 60% of East Africa’s GDP.  Interestingly, only 1.6% of the country’s arid land is cultivated.  Unlike Liberia, which specializes in tree cultivation, Somalia has found its strength in predominantly livestock farming, although irrigation is practiced in some areas.  Bananas and sugar cane are the main industrial crops of the country.

In its territory, Spain is one of the largest countries in Europe.  The country has 13.9 million hectares of land with permanent meadows and pastures and 5 million hectares, which are further cultivated, the rest is forest and industrial areas.  The most agricultural products in Spain are citrus fruits, olive oil, cereals, vegetables and wine.  Spain is also known as the world’s leading exporter of mandarins and oranges.

Belgium’s agricultural sector has begun to flourish following the recent development of technology and crop research, which has helped to yield significantly higher yields.  The whole sector is divided into crop and livestock production.  The lands of Belgium, rich in minerals, are popular for the production of good quality potatoes, sugar beets, corn, barley wheat, various vegetables and fruits.  Almost 35% of the country’s farms are used for crop production.

Under the supervision of the Australian Department of Agriculture and Agricultural Food, the agricultural sector has made significant progress through a wide range of cultivation methods, including spreading wheat fields and harvesting in the Okanagan Valley.  Therefore, Canada is considered one of the largest exporters and producers of agricultural products in the world.

Australia boasts over 973 million acres of farmland!  This impressive number means that you will not have problems finding a job in agriculture in Australia.  The main types of farms are fruit and livestock.  If you want to pick cherries or milk cows, Australia has the perfect program for you.

Australia also has the advantage of a fair minimum wage.  Working there, you will probably get paid, so you can travel and not be broken.  With the extra money you can explore the rest of Australia!  We are talking about a weekend at the Sydney Opera House, scuba diving near the Great Barrier Reef, work.

How I Take Care of My Farm |You Too Can!

How You Can Become A Rice Farmer 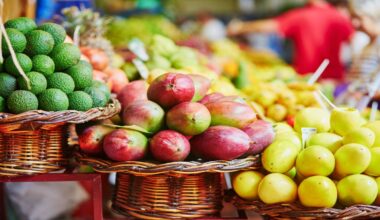 APPLY NOW
HHow to grow crops
The EatSafe Innovation Challenge is open to passionate for entrepreneurs, students, researchers and other innovators to share their ideas on…
APPLY NOW
FFarming Tips
Types of farming soil -Throughout human history, our relationship with the soil has influenced our ability to cultivate…
APPLY NOW
HHow to grow crops
How I plant and grow yams -Yams are one of the best crops to survive in the…